A Breakdown of Prenatal Testing 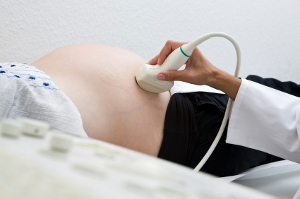 No sooner than you discover those two lines on your pregnancy test and break the news to those you love, you will probably turn your focus to wondering... what's next? And while there is a great deal of excitement to come there will also be many decisions to make, and a few bridges to cross before you can hold your baby for the first time.

You've probably heard the stories from older women - about how they didn't know they were having twins until they delivered them... or labored for hours with a baby in an incorrect presentation for a delivery before anyone discovered the problem. The technology surrounding childbirth is certainly better than it was even a few decades ago, but having so many options that are designed to detect potential complications can leave parents confused and concerned about their necessity and purpose.

There are a few tests that are very necessary, and should be conducted by your doctor with your first visit for prenatal care. He or she will then work with you to identify if there may be a need for further testing later. Not every woman will need to have every type of test, so remember that if your doctor doesn't mention some of these, it's okay.

Most physicians or midwives have a relatively similar set of blood work that they will need to collect on your first visit. He or she will determine when you had your last Pap smear, and if needed, they will probably complete the test that day. A Pap smear is a test that looks for abnormal cells of the cervix that could lead to cervical cancer. You will probably be screened for sexually transmitted diseases at the same time. Women usually have a Pap smear every year with their annual exam.

Next, you should be prepared for an ultrasound to confirm that your baby is growing as it should be. This will be a vaginal ultrasound - no belly scans yet because your baby is still much too small. Instead a lubricated tool will be inserted into the vagina to see what stage of development your baby is in. Don't be alarmed if you don't see anything on your first visit - if you are earlier than 6 or 7 weeks (even if you think you are further along) you may not see anything, and that's normal.

Other tests combine blood work and ultrasound results into what is called a "First Trimester Screen" where the fetus is examined and blood work analyzed to help determine the risk for Down's Syndrome Trisomy-21 and Trisomy-18 genetic disorders, as well as some heart defects. Currently, the test has been successful in detecting an average of 85 out of 100 babies with an abnormality. Only 5% of all pregnancies will have a positive result, and of those positives, mothers have a 1/100 to 1/300 chance of actually having a baby with any problems. The test is currently optional, and can be considered controversial by some simply because some women choose to terminate their pregnancies based on the results of the test.

After you are done in the office, be ready to roll up your sleeve for blood work. Among the tests that will usually be completed will be a blood type, Hepatitis, Rubella, and Syphilis result. Each of these components can dramatically affect the health of your baby if they are present and go untreated.

Between weeks 15 and 18, but no later than week 20, you will be offered the traditional "triple screen" test. Similar to the "First Trimester Screen" this test is strictly blood work and does not include any type of diagnostic ultrasound. The traditional "triple screen" detects three key components: the alpha fetoprotein (AFP or MSAFP), hCG, and estriol in the blood in an attempt to identify babies who are at risk for being born with a chromosomal abnormality like Down's Syndrome, Trisomy-18, or neural tube defects. This test has a high false-positive rate that has been hotly debated. Some research estimates that it provides a false positive rate as much as 80% of the time.

If you should decide to have a triple screen test, and you do get a positive result, your doctor will probably repeat the blood work, and do an in-depth ultrasound. After that, he or she may talk with you about an amniocentesis or chorionic villus sampling (CVS).

Chorionic villus sampling (CVS) testing is usually conducted during the first trimester, around the 10th to 12th week, where amniocentesis testing doesn't occur until 15-20 weeks. Chorionic villi are a component of the placenta, and have been shown to have the same information contained there as the baby's cells. The information that can be collected from CVS has been easier to collect, demonstrates consistent reliability and gives parents an accurate picture of whether or not their baby has a genetic or chromosomal disorder. By testing earlier than with an amniocentesis, parents may have more time to decide whether or not to terminate the pregnancy.

This 3D medical animation depicts an amniocentesis procedure to test the amniotic fluid during pregnancy.
If an amniocentesis is performed, a needle is inserted through the abdomen of the mother (guided by ultrasound to avoid hitting the baby or placenta) in an attempt to collect a sampling of the amniotic fluid for testing. Accuracy of the test is estimated to be 99.4%, and physicians can screen for Down's Syndrome, neural tube defects (like Spina Bifida), Cystic Fibrosis, Muscular Dystrophy, Tay-Sachs, and other conditions. An amniocentesis is not a routine test - and will only be offered to mothers with a significant medical or family history or strong risk factors for a disease. There is a 1%-2% risk of preterm labor, placental abruption or fetal death from an amniocentesis.

By now, you have been through a lot, and you have almost made it to your due date. But before we can say "push!" and count to ten, we must consider a few final factors.

The glucose tolerance test (GTT) will be conducted somewhere between your 24th and 28th week of pregnancy. The GTT looks at how your body tolerates and utilizes blood sugar. It is common during pregnancy for your hormones to make it difficult for the body to properly use its insulin - which puts some mothers at risk for gestational diabetes. The GTT requires you to drink a sugary liquid and wait one hour to have your blood drawn. These results are sent to your doctor and if they are too high, you will need to complete your three hour GTT. Some facilities will test only by sticking your finger; others will draw blood on the hour for three hours and then test the glucose level. If your levels are too high, you will be labeled as a gestational diabetic and will need to follow your doctor's orders to keep your sugar under control.

Between weeks 34 and 37, you will be tested in the office for Group B strep (GBS) by collecting a vaginal and rectal swab sample. GBS is a common bacterium that lines the digestive and vaginal tracts of up to 30% of women. Typically causing no problems, GBS can infect your baby-- causing blindness, hearing loss, and deadly infections after birth. If you do test positive, your doctor will treat you with antibiotics during labor to prevent spreading GBS to the baby.

As you near your due date, you may be asked by your doctor to take a Nonstress test (NST) or to have a Biophysical Profile (BPP). These exams study your baby's heart rate in relation to its movement through the use of a fetal monitoring device. The Biophysical Profile also uses ultrasound to analyze breathing movements, fluid levels and other components to determine how well your baby is growing and developing in utero.