Your Pregnancy Week by Week

*Counting from the first day of your last menstrual period

Just a Twinkle In Your Eye 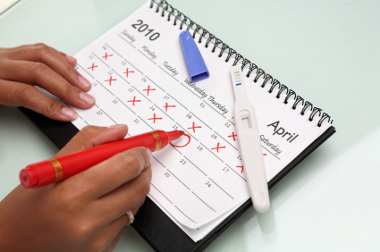 No one ever says "I'm one week pregnant." Why not? It isn't that you never are one week along, but more so that you don't ever know it. By the time you see those two pink lines on the stick, you are actually four weeks along, thanks to the way your doctor does the math. Even though your pregnancy has been in the works since you ovulated - roughly two weeks ago, your pregnancy is calculated by the first day of your last period - more than two weeks before. That means, that by the time you should be expecting Aunt Flow's visit again, you are have completed month one without even realizing it. In reality, a pregnancy takes 38 weeks to reach full term, but because many women ovulate at varying times during the month, modern medicine decided to take the easy way out and call it 40 weeks - taking in the week of your period and the week following, just in case you ovulate earlier, or later than the textbooks say you should. Many women get a bit confused when the topic of those early weeks of conception are discussed, but the process isn't has hard to understand as you might think.

Your monthly cycle starts and is measured from the first day of one period, until the first day of the next. A normal cycle should be about 28-32 days, but many women vary from this number to some degree. Ovulation will occur in the middle of this number - usually about 12 to 16 days from the first day of your last period. If you are unsure when you ovulate and would like to find the ideal time to conceive (or use extra caution), keep a calendar of your cycle length for a few months to find your average. While these are your most fertile days, conception can occur at any time during your monthly cycle, and on a different day within each month. Ovulation patterns may also shift if you have a month or two of excess stress, illness, or changes in hormones.

Signs of ovulation may be easy to spot for some women. One of the most obvious ways to know you are ovulating is to pay attention to your vaginal secretions. When you ovulate, secretions become thinner and increase in amount. Almost mucus -like, this discharge is very stretchy and slippery. These secretions, though a bit unpleasant, are key to helping sperm migrate through the female reproductive tract to meet an egg. Another symptom of ovulation may be a twinge of pain either on the left or right side of the central abdomen in the middle of your cycle. This pain, known as mittelschmerz in German simply means "middle pain". Other women report light spotting around the time of ovulation as well.

Baby Bump Photos - Week 1
Ultrasound Pictures - Week 1
Healthy Eating During Pregnancy
Pregnancy Myths: If the fetal heart rate is below 140 beats per minute, it's a boy; if it's above 140, it's a girl.
Baby Kick Counting
Once an egg is released from the ovary, it can live 12-24 hours before it must be fertilized to make a baby, or move down to the uterine lining where it will dissolve and be passed out of the body with your period. Usually, only one egg is released at a time. If an egg is fertilized, the rapid and complex process of cell division begins, and the egg will migrate down into the blood-filled, nutrient rich lining of the uterus for growth and support. In order to sustain the pregnancy, your body will flood with baby-supporting hormones - these hormones are the ones responsible for those early symptoms that make you wonder if you might just be pregnant. For some women, they may begin to notice these symptoms a week to a few days before their period is due. Some women don't identify them until much later.

For a pregnancy to occur, every cycle and every hormone must release and be timed correctly. Some women know first-hand that this process is easier said than done. Other women seem to make babies with ease. No matter if you are trying to get pregnant, or avoid it, being able to understand your body's cycles is key to your fertility. If you are trying to conceive, visit www.CountdownToPregnancy.com to track your cycles, record and compare your symptoms and may be helpful in tracking your own body's patterns and ovulation cycles. If your goal is to one day see those famous two lines, knowing your body will be the key to pregnancy success.

Your Pregnancy Week by Week Guide: Select a Week

** Note: Every baby develops at a different rate. The numbers provided are averages based on a "typical" pregnancy. Your baby's size and weight may vary significantly. Your healthcare provider is the best person to interpret information on your baby's size, weight, health and development during your ultrasounds and pregnancy.

Countdown My Pregnancy © 2023 - All rights reserved